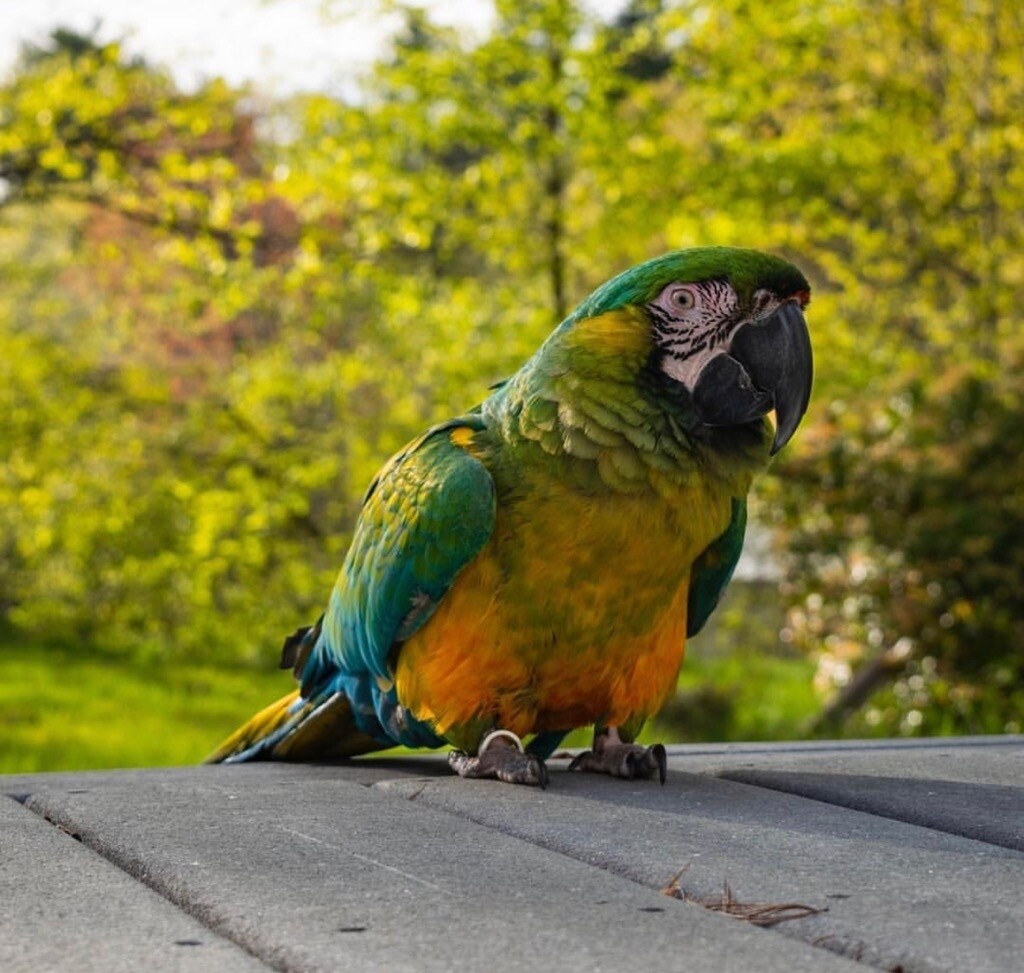 This Beautiful Macaw is for Pre-Order

Scientific name:   The Miligold Macaw is a first generation hybrid macaw. It is a cross between a Blue and Gold Macaw Anodorhynchus ararauna and a Military Macaw Ara militaris.

Distribution:   ThIs is a captive bred hybrid macaw. Hybrid macaws are rarely found in the wild.

Description:   Miligold Macaws, being a cross between a Blue and Gold Macaw and a Military Macaw, can have a very pleasing coloration. Both parents of the Miligold Macaw contribute to the striking colors of their offspring, though the father’s have the dominant gene and this will influence their final appearance.
Some of the characteristics seen in this bird are the blues of the Blue and Gold being tempered on the Miligold to a more greener aquamarine, with the outer wings retaining blue flight feathers. The head can resemble the coloring of the blue and gold, though with more greens. It can also have the the red lore of the Military Macaw.
The best way to be certain which bird is the father, however, is to ask at the time you obtain your bird.

Size – Weight:   The Miligold Macaw is a full sized macaw, however they will tend to be on the smaller side due to their Military Macaw parentage. Lengths can range from 27″ up to 34″ (70 – 86 cm).

Care and feeding:   A roomy cage is required unless the bird is to be let out for extended periods. Many birds can spend most of their time on a play pen or parrot perch. They eat a variety of seeds, nuts, fruits, and commercial pellets, as well as the same nutritional foods humans eat.

Social Behaviors:   They are a very gentle bird that will get along with more than one person. But they are a typical macaw and can be cranky at times. To have a well rounded bird that enjoys more that one person, make sure it is well socialized with lots of folks. See About Macaws: Social Behaviors for information on developing a well rounded friendly macaw. (Also information on handling and activities)

Breeding/Reproduction:   This is a hybrid and it use to be that they were generally not bred, however the breeding of hybrids is becoming more common. See About Macaws: Macaw Breeding, Bird Reproduction – Baby Macaws for information on breeding macaws.

Availability:
The Miligold Macaw is only occasionally available. Finding these beautiful macaws for sale is easier than some of the less commonly bred hybrids.

Availability:   This bird is only occasionally available. There are more and more macaw breeders however, so finding these macaws for sale becomes easier as they become more common.

Save this product for later
Display prices in: USD