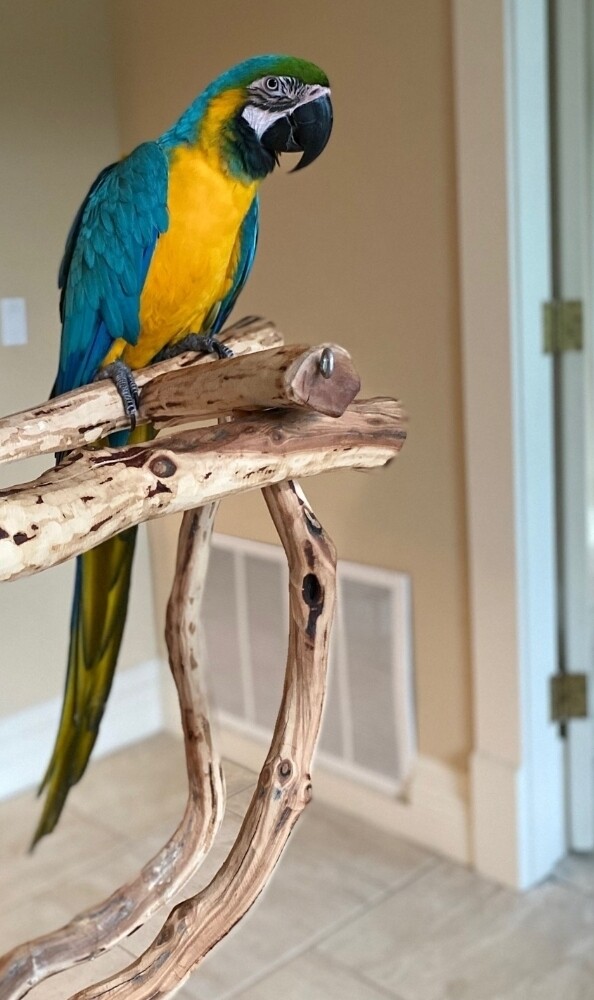 This is one beautiful Blue and gold Macaw for Pre-Order

The Blue and Gold Macaw Ara ararauna is currently considered a monotypic species, meaning that it contains only one species. However, taxonomy is an ongoing science, and as experts learn more it could change. Here are a couple of Macaws that have raised questions:

DistributionThe Blue and Gold Macaw Ara ararauna was first described by Linnaeus in 1758. It is also known as the Blue and Yellow Macaw, and a variant from Bolivia is referred to as the Bolivian Blue and Gold Macaw. It is found across a vast region, from eastern Panama in Central America south across northern South America, extending to Bolivia, Brazil, Colombia, Ecuador, French Guiana, Guyana, Panama, Paraguay, Peru, Suriname, and Venezuela. It has been introduced into Puerto Rico.

The Blue and Gold Macaws have an extremely large range. It encompasses a terrestrial system of lowland riverside forests to open savannah lands. Though their habitats includes open marshlands, they favor rainforests, woodlands, and tall palms, especially along swamps and rivers.

In the wild they are seen in pairs, and fly in large flocks to and from feeding grounds in the early morning and at sunset. They are most often seen living high up in large trees, and nesting in the hollow trunks of dead trees. They feed on seeds, nuts, fruits, and possibly some vegetable matter. They seem to prefer the fruits of palms.

StatusThe Ara ararauna is on the IUCN Red List for Endangered Species as Least Concern (LC).

DescriptionBlue and Gold Macaws are among the most beautiful of the Macaw Family. They are a striking turquoise blue from the neck going down their back and the tops of the tail feathers. The chest and legs consists of feathers of gold. There is a bare facial patch with very small lined feathers going across the face. Right on the top of the head, there is usually a patch of green. The feathers on the underside of the tail are the gold color. The beak is black.

The Bolivian Blue and Gold Macaw is a variant originating from Bolivia. It looks just like the typical Blue and Gold, however, it is much larger. It is the size of a Green-winged Macaw Ara chloroptera and often can be as large as the Hyacinth. A mutation of the Blue and Gold Macaw has also been reported where the yellow coloring is absent creating a blue and white bird.

Care and FeedingIn the wild they eat a variety of seeds, nuts, fruits and plants, and things such as small lizards. There are name brand commercially prepared seed or pellet mixes for the Macaw. They can also eat anything nutritious that you eat and these foods should be offered. Most parrots enjoy eating with their family. They eat protein in the wild and they do like chicken. Avocado and chocolate are toxic to parrots.

They require bathing to keep their feathers from drying out. They are used to a humid climate and without bathing their feathers will dry out and become itchy causing them to chew on them. You can spray them down with room temperature tap water or a commercial bird bath. Many owners just take their Macaw into the shower with them. They make shower perches for Macaws.

HousingA roomy cage is required, at least 2 1/2 by 3 feet. Because Macaws can be quite vocal, be sure the cage is in a room where the amount of noise the neighbors hear is a minimal as possible. A large sturdy perch needs to be mounted in the cage. Fresh fruit tree branches work great because they can chew on them as well, but then they will have to be replaced occasionally. Food and water dishes, along with a treat dish work best mounted above the perch at the side of the cage. A variety of toys for playing and chewing should also be provided. As alternatives to a cage, they can be kept in an outdoor aviary where the weather permits, and some people like to provide their bird with its own “bird room”.

These Macaws need 2 – 3 hours a day outside their cage. The Macaw’s cage is their territory and a play pen top is great, but it is still their territory. It is better to interact with this Macaw on top of a sturdy perch away from the Macaw cage. A separate, free-standing playpen works great for this. Sometimes they will get down and just walk around looking for you. But usually once they hear you they will walk directly toward you. Many birds can spend most of their time on a playpen or parrot perch. .

MaintenanceThe basic cage care includes daily cleaning of the water and food dishes. Weekly you should wash all the perches and dirty toys, and the floor should be washed about every other week. A total hosing down and disinfecting of an aviary should be done yearly, replacing anything that needs to be freshened, such as old dishes, toys and perches.

Social BehaviorsIn the wild the Blue and Gold Macaws are seen in pairs. During non-breeding season they will flock in large numbers to and from feeding grounds, and can be seen peacefully with other birds.

As a pet, the Blue and Gold Macaw is known to be a good family type bird. They are a gentle bird that will get along with more than one person, although they will probably have a preference in the family. But they are a typical Macaw and can be cranky at times and may prefer only one person or only one gender. To have a well-rounded bird that enjoys more than one person, make sure it is well socialized with lots of folks.

Handling/TrainingThe Blue and Gold Macaw adapts quickly. Once it becomes accustomed to a new environment and its keeper it is then ready to start bird training. Generally though, you should give a new arrival a few days to get use to you, your voice and its cage before trying to handle it. A hand fed baby will not need much taming and can often be handled right away, as it is use to human attention.

With all parrots, taming and training takes trust and patience. Macaws are very intelligent making them easy to tame. They are also very adept at learning and quick to train. They excel best at learning tricks and small tasks. They are not as inclined to talk and mimic as some of the other parrots, notably the Amazon Parrots, but they can learn a few words or phrases. The Blue and Gold can develop a general vocabulary of about 15 or more words or expressions.

ActivitiesFor the physical well being and psychological health of a Macaw Parrot, they must have plenty of opportunity to exercise and play. These are lovable pets and activities include interactive time with its keeper. Everything from petting, cuddling, and preening is appreciated, as well as performing and learning new tricks. But these are also very large, rambunctious pets that need a good sized space to play and climb around. Both climbing around inside a large cage, and providing a outside playpen offers them interest and variety.

Macaws are avid chewers, munching intently on anything they can get a hold of. When they are on a playpen, make sure they can’t reach trim or any household items you don’t want destroyed. Provide lots of toys and activities in the form of large link chains, bird ladders, parrot swings, ropes, and wood toys for gnawing and chewing. Rotate in new bird toys on a regular basis.

Providing regular interaction and lots of playtime. Having plenty of space and a large selection of toys and activities will help deter distress in your pet Macaw. It will also reduce the chance of your parrot developing undesirable behaviors like screeching, biting, and feather picking.

Sexing – Sexual DifferencesIt is said that the males head is flatter and the females head is rounder, and the female beak is narrower than the males. However, There is no for certain way to distinguish the male Hyacinth Macaw from the female. In order to know whether you have a male or female, the bird must be sexed. DNA / Feather or surgical sexing is recommended.

Breeding/ReproductionCaptive breeding in the United States has occurred since at least 1935. The Blue and Gold Macaw has been known to breed at as young an age as 3 years. Their lifespan for reproduction is long, several decades. The usual clutch consists of two or three eggs which incubate for about 28 days. The chicks will stay in the nest for about 3 months and are quite large when they fledge. Feed the parents plenty of green stuffs, corn-on-the-cob, carrots, protein, and fruit laced with food supplement while they are rearing the youngsters.

Potential ProblemsIt is definitely true that a Macaw parrot can make noise, but it is not often, and not without some provocation. Usually, if they make a loud squawking noise if they perceive something to be wrong or different. Maybe a car they don’t recognize is coming to the home or the dog is loose. They are also known to make a large noise for about 10 minutes as the sun is setting. This is an alert to their flock to settle in for the evening.

A pet Macaw when well cared for will seldom become ill. Yet they can contract some diseases, and there some also things in the environmental that can cause illness. Behavior problems can also occur, resulting in feather plucking, biting, and loud screeching. Though it is often difficult to determine illness, some visible signs of illness to be aware of are:

Some of the more common illnesses are:

If you notice any of these bird illnesses in your Blue and Gold Macaw immediately provide a warm, draft free, secure environment kept at about 86°F (30°C). Place food and water close to the perch where it is easily accessible. An ailing parrot should be taken to an avian veterinarian for diagnosis and treatment.

Save this product for later
Display prices in: USD