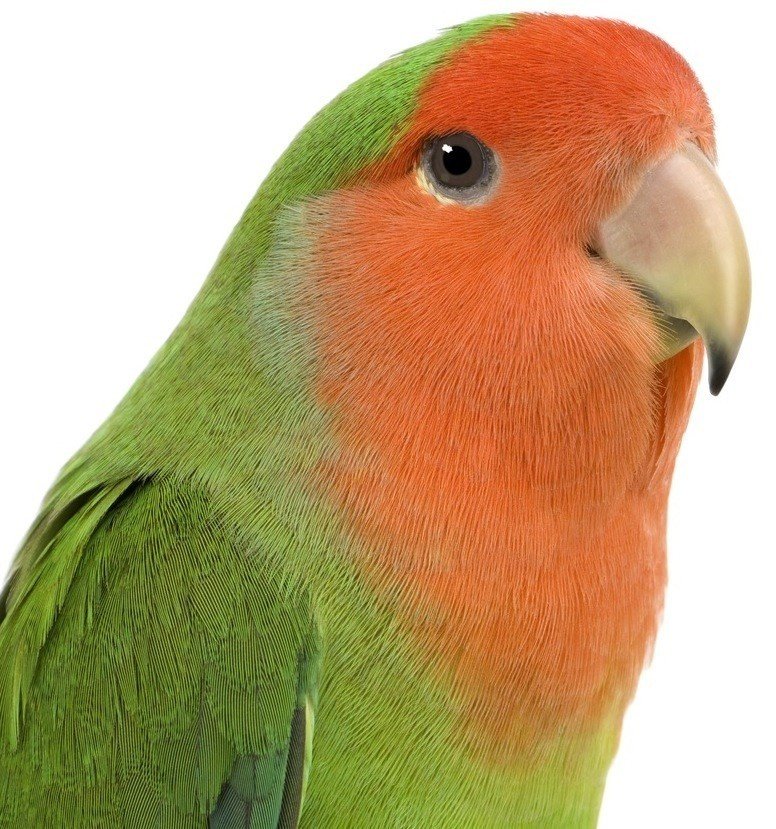 This species was discovered in southwestern Africa in 1793. At first the scientists thought that it was a subspecies of A.Pullarius, however in 1817 it was recognized as a different species. The A. Peach Face Lovebird has a subspecies that is the A roseicollis Catumbella.

The Peach Face Lovebird are about sixteen centimeters long and are mainly green. The ancestral mask is red on the forehead and gradually dilutes to pinkish black below the peak. The rump is blue and the tail has reddish spots. The beak is bone-colored, the legs are gray and the ones go from dark gray to black. The subspecies A rosecollis catambella is slightly smaller, has a more intense color and the beak is light orange. For the rest it is equal to A. Peach Face Lovebird roseicollis. It was not described and recognized as a subspecies until 1955.

The Peach Face Lovebird live in freedom in groups of between thirty and thirty birds and usually breed in nests of abandoned weavers. The weavers (small birds that live in the same habitat as the Peach Face Lovebird and build nests in the form of a ball) build communal nests with dozens and sometimes hundreds of interior nests. The Peach Face Lovebird do not have problems in throwing the tegedores and staying with part of their nests since of this node they do not have to transport nesting material to these nests prepared to use. However, when they use holes in the trees or even buildings if they gather their own material. The form of the transport of the nesting material is exclusive of the Peach Face Lovebird, the female stick strips of bark and branches in the plumage of its tail and covers them with the upper wings. Surprisingly, it does not collect any material that has been dropped by the way.

​    The Peach Face Lovebird is one of the species that breeds easily in quantity and therefore has become one of the most popular Lovebird species. Normally they are kept by breeding pairs in breeding cages but also breed quite well in aviaries. If you prefer to house them in an aviary, you should provide them with more nests than there are breeding pairs and try to hang them at the same height.
To start, it is preferable to place the reproductive pairs in separate cages. Once they have become accustomed to each other you can pass them to the aviary with the rest of the birds. This method avoids many problems. However there may be a problem if there are singles among the birds, the males start to fight for the females but the opposite may also happen, the females that are left over will not be afraid to fight with their rivals until the end. Therefore, immediately remove the problem birds from the aviary.

​Like the rest of the species, the Peach Face Lovebird lay white eggs every other day. A nest normally consists of four to five eggs and if everything goes according to plan the chicks will be born 23 to 25 days later. The existing literature states that the incubation period is 23 days but experience has shown that it can vary a lot. The ancentral Peach Face Lovebird has the orange plume when it is born. You can rinse the chicks when they are 9 days old. Normally they leave the nest about forty days later and should be left with the parents about 14 more days. It is no wonder that the female then puts in a new clutch while the chicks have just left the nest. Always ensure that you have clean water for swimming during the breeding season.

Non Handfed Lovebirds that are sweet.